A glimpse of the 15 minute city in Paris

A glimpse of the 15 minute city in Paris 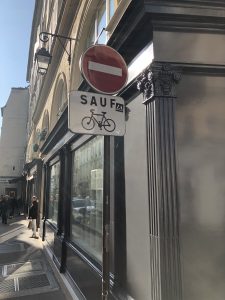 Back in March, Mrs K had to postpone her plans to whisk me away to Paris, sans infants, for a romantic weekend. Last weekend we finally got to the City of Lights (by Eurostar, natch) to mark our 30th anniversay of getting together. We had an amazing time wandering the streets arm in arm, sampling the pavement cafes and ignoring the price tag…

What we did notice were the emerging signs of Mayor Anne Hidalgo’s famed ’15-minute city’: the idea that most of your needs – work, shop, play – should be within a 15 minute walk or cycle ride of your abode. As well as cycle contra-flows on otherwise one-way side streets, many streets were closed to through motor traffic and more strategic cycle routes were being built into the sides of the grand boulevards which used to be used for parking.

The results were noticeable – the Velolib hire bikes were very popular, as were electric scooters, but there were also plenty of Parisians looking effortlessly stylish pedalling private bikes, and many more cargo bikes than I would see at home. The only downside was that the Parisian tendency to go into congested areas ‘a little hot’ for my liking persists on bikes as well as cars.

It has to be said that Paris appears well-suited to the 15-minute model as food shopping in particular is very localised – we never seemed to be too far from a boulangerie or a charcuterie. I often argue this is the element missing from the British view of the 15 minute city, ie it is not just about how you get to your destination, but where your destination is.

Yes, if people start using local services then these will improve organically, but the decimation of the traditional high street in the England by large supermarkets means we are starting from a much lower base. On my street you can see the remnants of more than a dozen shops, but only one corner shop survives. I would love to see planning rules that protect shops from conversion into flats, but the last time I objected to such a change, I was told that the road concerned wasn’t a designated shopping area, despite having plenty of shops.

The determining factor for this model, as always, will be personal behaviour. For somebody who was brought up hearing my parents debating which butcher did the best pork chops or which greengrocer stocked a particular variety of spuds, I’m not the greatest at traditional shopping, with the notable exception of our corner shop which I use daily. I am going to have to train myself to use the other emerging local food shops, the same way I gladly support local coffee shops, pubs and restaurants. Use ’em or lose ’em!