A quick reset with nature

A quick reset with nature 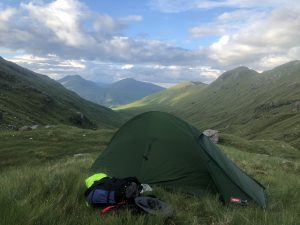 This time last week I was on a train heading north into Scotland. In my rucksack was a set of lightweight camping gear, along with three days’ worth of food and a trowel. My destination was the Knoydart peninsula, aka The Last Wilderness, to which there are only two means of access – boat or a long walk. And I was taking the latter.

I got off the train at Glenfinnan at teatime, marched past the tourists taking selfies in front of “the Harry Potter viaduct” and headed up the first of three mountain passes, camping for the night just over the saddle (see pic). The next day I walked 8 hours to a beach at Camusrory where I camped again, and then the last morning I headed over the last pass to Inverie on Knoydart itself. It was a tough old hike, not so much due to the elevation gain or distance, but the constant clambering and bog-hopping which took its toll on the thighs.

It was rather wonderful. While fully conscious of my reliance on high tech fabrics, lightweight materials and some clever kit, there is something very grounding about having complete choice as to where to stop for the night, choosing the best streams for water and 44-hours of enforced digital detox. Oh, yes, and having to dig your own toilet.

At Camusrory in particular, I spent a long time just watching nature – the seal in the bay, the family of ringed plovers rummaging in the seaweed and the small herd of deer that weren’t bothered by me watching them over my breakfast. Unfortunately I wasn’t isolated enough from the smaller Scottish wildlife, the infamous midge and its even more evil, lesser known cousin, the clegg, despite my hat with insect net.

While I felt a wee bit guilty taking off during one of the busiest periods the business has ever experienced, I have come back truly refreshed. In particular I’ve been sleeping well, something that has been a rarity in the last years and a half of craziness. Appropriately one of the biggest projects I’ve come back to includes, amongst many other things, the therapeutic benefits of nature. I can vouch for that!