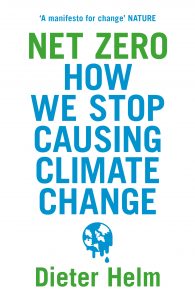 I haven’t read a Sustainability book for some time, so when my partner handed me a copy of Dieter Helm’s Net Zero at an Alpkit outdoors store of all places, I thought, yes, I really should give this a go. Helm has long been recognised as something of a contrarian contributor to the climate debate, so I knew that I would definitely get some food for thought.

Helm starts the book with a coruscating demolition of climate policy over the 30 years since Margaret Thatcher’s groundbreaking speech on the dangers of climate change to the United Nations in 1990. Few are saved from his scorn, from the UNFCC to the UK’s Climate Change Committee, and he has a point: none of the myriad conferences, speeches and reports have done anything to stem the rise in carbon concentrations in the atmosphere. We have failed.

Helm argues persuasively that, rather than waiting forever for international agreements, countries can go it alone on climate change if they implement a carbon tax, but not only on domestic emissions. The most important element is a tax on imported carbon. So if a mobile phone, say, can be proven to be produced by clean energy, then it will face a lower import tariff than one produced using coal power, creating an incentive for consumers to buy the lower-carbon model. This puts moves the emphasis from taxing production, which can simply drive high-carbon industries overseas, to taxing consumption, so a high carbon product will be more expensive wherever it is produced.

This style of carbon tax is the first of three principles Helm puts forward. The other two are ‘public money for public goods’ and ‘net environmental gain’. The first of these distinguishes what is best done by the state and what is best done by the market, the second is an argument that we must go beyond the goal of ‘net zero’ set out in the title of the book to account for uncertainties. On the former, he identifies physical infrastructure (eg a renewables-friendly electricity grid) and R&D as the elements which should be state-led, whereas those that generate energy would compete in the market.

I get the impression from the book that these three come together in Helm’s vision so the carbon tax pays for the development of the low carbon infrastructure and the offsetting/sequestration. I say ‘impression’ as my criticism of this book is that the self-confidence with which Helm lays into the efforts of others in Part One seems to desert him as he puts his own proposals forwards. Another example, amongst quite a few, is where he implies we should use gas as a transition fuel between coal and renewables, but, again, never quite says it explicitly. I don’t know whether this is simply Helm’s writing style or a matter of him hedging his bets, but, like so many books in this sector, the problems are much better defined than the solutions.

Don’t get me wrong, there’s loads of great stuff in this book, the carbon tax on imports being the most important, however it would’ve been so much better with a concrete plan of action. But, to paraphrase Helm himself, it’s better to be vaguely correct than definitively wrong.