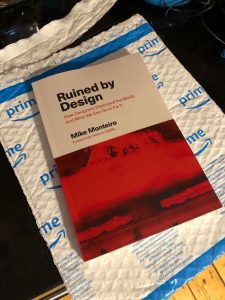 In 1996, I visited the Auschwitz/Birkenau death camps in Poland. I was in two minds about going, with a nagging feeling that I was indulging in genocide tourism, but came to the conclusion that I really should face up to one of the most horrific passages in human history. And it did really affect me – the gas chambers, the piles of false limbs, and that grimly iconic Birkenau gatehouse with rails still running through it – the journey to doom for so many.

But the bit that really hit me hardest was most unexpected. It was a display of the technical drawings of the gas chambers and the ovens (complete with corpse on a cart to illustrate the efficiency of disposal). As an engineer, I was totally gobsmacked that someone, almost certainly with hard won professional qualifications, could sit at a drawing board, with technical pen in one hand and scale rule in the other, and deliberately design the tools for genocide.

The holocaust is obviously an extreme case, but ‘Ruined by Design’ by web/UX designer Mike Monteiro makes the case that far too many of us designers/engineers leave our ethics at home when we rock up to work. In a coruscating, righteous rant, Monteiro argues that Twitter could not be better designed for supporting racists and fascists, that the Uber software is deliberately designed to block out those who might regulate it and that professionals designed the ‘defeat device’ that allowed VW to put polluting vehicles on the road. Monteiro doesn’t hold back:

The world isn’t broken. It’s working exactly as it was designed to work. And we’re the ones who designed it. Which means we fucked up.

Monteiro’s solution is a hippocratic oath for designers: do no harm. He sets out a code of ethics which blows away the whole “just doing my job/following orders” cop-out. He argues that if you are hired to design, you owe your employer your counsel as well as your labour: you are morally obliged to point out the ethical shortcomings of what they design – or walk away.

As Monteiro works in the tech industry, most of his fire and solutions focus on that sector and associated ethical issues, but his point stands for environmental issues too. In fact you could argue that the environment has a stronger case for ‘do no harm’ as damage can be objectively measured, unlike ethics which are more subjective. Engineers designed the cars, the planes, the power stations and the factories which pump out carbon dioxide. And engineers can be a big part of the solution too – the EVs, the renewables, the smart grid, the cycle routes, the buildings. We can decide what we design.

When I was recommended this book by my occasional collaborator Nick Devitt, I was really desperate for a book to make me stop and think about the world in a different way and put some fire in my belly. The last one that did the former (but less of the latter) was Doughnut Economics almost 18 months ago, apart from that I have found myself trudging through page after page of dismal, boring nonsense. Monteiro’s polemic hit the spot – I feel fired up again.

As a somewhat ironic footnote, I ordered Ruined by Design from Amazon, and it arrived in one of their new non-recyclable plastic packets. Somebody decided to switch from easily recyclable cardboard to plastic. Somebody printed a weblink promising instructions for recycling which takes you nowhere. Somebody designed that packaging knowing it would end up in landfill for 1000 years. As Monteiro points out, all these decisions matter.