How many pairs of pants are Sustainable?

How many pairs of pants are Sustainable? 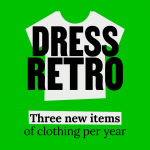 Last summer, I criticised the Guardian for an article that urged its readers to do 10 things to do to save the planet, none of which required changing our own personal behaviour. Strangely I got widely attacked for blaming the individual for climate change rather than the evil forces of neo-capitalism (whatever that is). My point was that no chief executive ever frogmarched me onto a plane or force fed me a steak – every pound/euro/dollar we spend is a choice between different carbon impacts.

So I was intrigued when last week, the Guardian flipped the other way, promoting a project called The Jump which involves people making 6 pledges which would create a Sustainable lifestyle. Then I got a bit of a shock as to just how severe these six pledges were, most notably the suggestion that we only buy three items of new clothing every year. And I’ve been mulling on that one ever since.

Now, I am no fashionista (understatement klaxon!). I regularly wear items of clothing which are over 20 years old, and I almost never dispose of an item of clothing that isn’t in tatters, but I really think I couldn’t match that pledge. I can’t find a definition of the type of items of clothing that count towards the threshold of three, but I’d hit it buying underwear alone. Yes, I could buy all my clothes second hand, but that relies on loads of other people donating unwanted clothes with plenty of life in them (presumably to be replaced by new items), so the model isn’t really scalable beyond a green niche. Let’s face it, pants (and socks, and trousers, and shoes, and t-shirts…) only last so long.

I’m not criticising either the Guardian or The Jump here as I do believe everybody must change their lifestyles to address climate change and buying second hand stuff is a very good thing to do. What I do think the ‘three items threshold’ illustrates is the unsustainability of our production system – and that we need Sustainable Production and Consumption, not one or t’other. This is where the circular economy comes in – keeping resources cycling continuously in the economy – rather than trying to slow down a linear economy which will never be Sustainable. In other words, new pants should be made out of old pants, because, let’s face it, we all need pants.