Ice, ice, maybe: what the cold snap shows us about Sustainability

Ice, ice, maybe: what the cold snap shows us about Sustainability 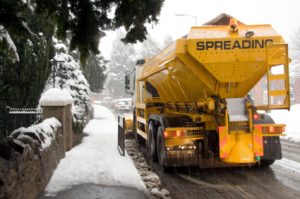 This morning, on my ritual walk up the hill outside my house to the corner shop, I had to walk on the road as the pavements were coated in a ridiculously slippery film of ice. Half way up I had to step onto the pavement to let a bus pass and thought I was marooned there as I couldn’t get any traction at all until eventually I managed to slither back onto the road. When I got back home I told the older two kids they shouldn’t cycle to school under the conditions. Meanwhile all the main roads and bus routes (like my road) were clear of ice for motorists.

This is a particular bugbear of mine as the transport hierarchy says pedestrians should have top priority, followed by cyclists, then public transport and then the private motor car, but in practice the latter two modes get all the attention and the former two groups are on their own. It is all too typical of a world which is trying to move towards Sustainability on a theoretical basis, but in practice is reinforcing business as usual. When you ask, as I have, why the gritting routine doesn’t follow the transport hierarchy, you get very odd looks – as if it is strange to wonder why practice doesn’t reflect top level policy. When you add up all the zillions of similar misalignments where it is easy for people to continue unsustainable behaviour and a chore to do the right thing, you can see why carbon emissions remain stubbornly high.

But, fortunately, things are starting to change, with cities such as York and Edinburgh starting to add key pedestrian and cycle routes to their priority gritting/clearing plans. Hopefully this will wake other authorities up to the fact that change is both necessary and possible. Likewise, all of us striving to make Sustainability happen in organisations must ‘shape the path’ so sustainable behaviour is easy and unsustainable behaviour is more difficult. Eliminate those misalignments with extreme prejudice!