Let’s open up Sustainability to others…

Let’s open up Sustainability to others… 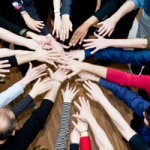 I recently posted a piece on LinkedIn about Greta Thunberg‘s laudable attempt to bring the climate crisis to public attention, but warning that her message was resonating within the green/liberal bubble and we needed to find way to translate it for those outside that bubble. Some people added reasonable comments below the piece agreeing or disagreeing with me. None of the comments were anti-climate action, just differing views on the way forward.

But one guy completely missed the point of the piece, posting personal and baseless insults to anybody who dared criticise Thunberg’s approach. Here are the lowlights:

Just can’t hack when a little girl is smarter than you, is that the problem?

no one has ever admitted being a troll or denier. I didn’t think you’ll be the first. Maybe you’re just confused.

Frankly, what does he think he’s going to achieve by such abuse? This ‘you’re with us or against us’ mentality will not stop a single tonne of carbon being emitted. Sustainability is a process, not a cult.

The Sustainability movement must be open and engaging to bring more people on board, change behaviours and oil the cogs of change. My ‘Green Jujitsu’ approach to engagement is based on the idea that your target audience is more important than you. I work to people’s strengths rather than trying to correct ‘weaknesses’, getting them involved in the process.

I can assure you it works one hell of a lot better than flinging insults around.