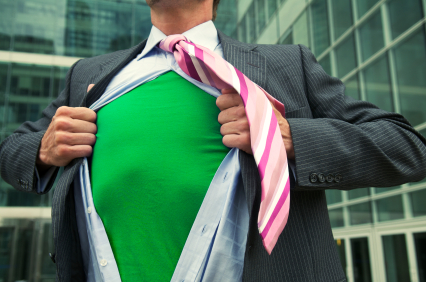 When I first set up Terra Infirma I was a bit of a jack of all trades, but over time I started to pitch the business at customers  who really wanted to align themselves to Sustainable principles. I decided that all the data/process-heavy sausage-machine services such as ISO14001, carbon footprinting or GRI weren’t for me. Instead I would focus on Sustainability strategy and stakeholder engagement as that’s where I felt I could a. add maximum value and b. develop my own methods rather than following standards. Standards are essential but compliance-based – I’ll never forget the quip ‘ISO14001 allows you to destroy the environment in a well-documented manner’ – and I wanted to deliver big hairy-scary transformative change.

Great in theory, but in practice I was all too often falling between the stepping stones of ‘good intentions’ and ‘action’ – working up projects and proposals with potential clients only for there to be an endless succession of reasons why the time wasn’t quite right to start. I had some work with great clients who saw the world as I saw it, but not as much as I’d like, and I started to fear I wasn’t getting it right.

So, last March, when Covid-19 hit, I thought I was in for a really tough time – who would want to talk 10-30 years into the future when a killer plague was sweeping the world? Fast forward 18 months and the converse is true – I’m flat out, even over the summer months when things usually quieten down, it has been utterly relentless. This week is the first for a while where I’m actually able to sit back and think about the future for a bit – and tidy my desk which is a visual representation of my workload despite my ‘paper-free’ ambitions. And then next week I’m back into the maelstrom again.

I don’t think this is luck. Instead of being busy despite Covid, I think it’s because of Covid. I know that personally I’ve being ticking off a few bucket list items – we’ve all been given a brutal reminder of the fragility of human life on earth, so why put stuff off? I now see this mental switch is happening at a corporate level – suddenly the mentality is “what are we waiting for?” They want to let go of the side of the pool and start swimming – and proper front crawl rather than doggy-paddling with armbands.

I think we’re going to start to see lots of synergies converge and accelerate progress faster than we could imagine. In the same way the apparently revolutionary iPhone was a neat synthesis of technologies which had been evolving over decades, if every business in the value chain starts to embrace radical change, then the economy will transform fast.

For example, one of my clients has tough targets for their supply chain but admits they haven’t made much progress. However, I’m working with two of their suppliers whose attitude is “we’ll fix that for you!” What more could you ask for?