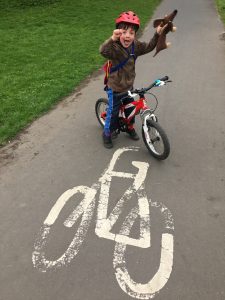 OK, my blogging has dried to a trickle and I’ve had an overwhelming wave of indifference from my readers… Anyway, the reason for my radio silence is that I’m deep into local election time and being agent/campaign manager in the very marginal ward I represent means that my mind is elsewhere. However, one issue which has arisen today is Low Traffic Neighbourhoods (LTNs) which had pretty much been parked for the election.

Looking around the country, LTNs are divisive to say the least. This is where the rhetoric hits reality – decarbonising the grid, say, is relatively easy as the general public gets the electrons as per usual. But transport choices are a whole new ball game where we are trying to change habits built up over many decades.

The Government has decided that the best way to bring LTNs in is on a temporary basis and then see how they go for 6 months. Having scars on my back from many different projects over the years, I don’t think this is wise as people will a. feel that something is being imposed upon them and, b. will say that the decision has been made and the consultation meaningless.

The psychology of change is that when presented with a change we tend to exaggerate the risks and downplay the upsides. When we have the idea ourselves, this bias flips so we see only upsides and play down negatives. This principle underpins about 90% of my consultancy.

We had a previous project in this area some years ago where local residents did a lot of drawing on maps to design their own solutions, but when it came to implementation, suddenly the funding was channeled to another neighbourhood (we think someone messed up the overall costings). This was a massive shame as we had the buy-in. WE. HAD. THE. BUY-IN. Fortunately a local resident has taken up ownership of one of the major changes and, pre-pandemic, did the legwork going door to door to gauge support. And he appears to have secured it.

Only time will tell what the reaction will be when the LTN measures go in – I’m expecting plenty of correspondence! I will almost certainly find myself defending an approach to consultation I don’t agree with, but unfortunately this is the only game in town for Sustainable neighbourhoods, and of course do nothing is not an option. I’ll keep you up to date!