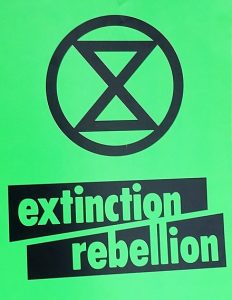 Last Sunday, just before 11am, I put on the TV and sat with the kids and watched the wreath-laying ceremony at the Cenotaph. I’m not a big one for flag-waving or national pageantry, but I do like to pay my respects to those who have laid down their lives to protect our way of life – although I must admit I sometimes forget the actual moment to fall silent. I also thought it would be a good opportunity to show the kids that the freedoms we enjoy should not be taken for granted.

The commentary made a reference to some kind of protest, but we didn’t notice anything on screen. It was only afterwards that I found out that Extinction Rebellion (XR), had held up a big banner saying “Climate Change Means War” in front of the Cenotaph. My jaw dropped. I would have thought that XR would have learnt from the anger they generated by stopping people get to work on an electric train last year, or the ridicule they attracted when they doorstepped David Attenborough, a man who has done more to promote the Sustainability cause than any other in recent years, when he suggested they shouldn’t break the law. But no, they know best.

But aside from the utter contempt for the ritual of remembrance, XR don’t seem to realise the damage they are doing to our cause. At the risk of stereotyping, the people most resistant to change to cut carbon, the socially conservative, are also the very people who tend to take the act of remembrance most solemnly. If that substantial segment of society feels that their sacred spaces and rituals are being desecrated, they will get angry, very angry – and not in a way XR would like. How does pissing them off help us tackle climate change?

My whole approach to engaging people in Sustainability, Green Jujitsu, is based around working out who we need to make different decisions, and how to engage them on their terms (for more, click here). This is a subtle, but powerful art, and it takes humility, respect and empathy rather than arrogance and disdain. And, more importantly, it works.