Progress is always messy – climate action is no different

Progress is always messy – climate action is no different 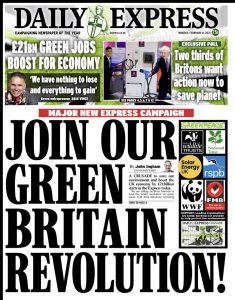 One Christmas Eve Eve, Mrs K and I buckled down to wrapping Christmas presents for the mini-Kanes. I can’t stand wrapping, partly due to the waste and partly due to being as lazy as shuck water (as my late mother would’ve put it), so I put the telly on in the background to distract me. I’m not a big fan of Christmas specials either (you’re probably sensing a pattern), so we ended up watching a documentary of Vienna through the centuries.

What struck me was the City’s oscillation between open enlightenment values and bitter, violent nationalism (it ended with the emergence of a certain young fascist in the 1930s). This seems to be a cyclic pattern throughout the world. I have rose-tinted memories of the 1990s, being young, relatively well-off and free of responsibility, enjoying a British cultural explosion (BritPop, the YBAs etc) and the grim backdrop of my youth getting ‘fixed’, most notably the Cold War and the Northern Ireland Troubles (I grew up in 1970s/80s Belfast). I have to keep reminding myself that the 1990s also featured the horrors of the Bosnian War and the horrific massacres in Rwanda and Burundi. But somehow we make progress overall, with the present day being one of the best times to live in terms of global poverty reduction and a historically low level of violent conflict.

Politics is always a balance between progressives and conservatives (my use of lower case very deliberate). You could argue that true progress takes place only when conservatives decide to ease the handbrake and allow the nation to start moving forward in the direction the progressives are pulling. One of the reasons why the UK is making fast progress on tackling climate change is that the Conservative party has decided to stop the rearguard action they’ve been fighting for years and suddenly we have political consensus for change at a high level of policy. There’s still work to be done at a local level with, to take a current example, many Conservative Councillors campaigning against individual ‘low traffic neighbourhoods’, despite the concept having been launched by their own Government, but I expect that resistance will ease over time as LTNs become part of The New Normal.

The one major bastion standing against climate action is the right-wing media, with the Telegraph and the Spectator continuing to indulge lukewarmers like Matt Ridley, no matter how many times they are proven wrong, and play to anti-cyclist sentiment. Therefore it was a massive shock yesterday to find the optime of reactionary anti-green sloganising, The Daily Express, splashing on the ‘Green Britain Revolution’. My immediate reaction was this was a puff piece for Boris Johnson (the Express has been a faithful cheerleader for the PM), but the presence of Ecotricity founder Dale Vince (a Labour party donor) and Greenpeace suggest that there’s something more to this.

One criticism I have of the environmental movement is its tendency to focus on the negatives and not the big picture – and as they say, perfection is the enemy of success. I know I’m an inveterate optimist, but if the media resistance starts to crumble, we are really seeing the window for action start to grow. Let’s work to keep that momentum building!