Sustainability messaging lessons from the Conga of Doom

Sustainability messaging lessons from the Conga of Doom

12th May 2020 Uncategorised No Comments 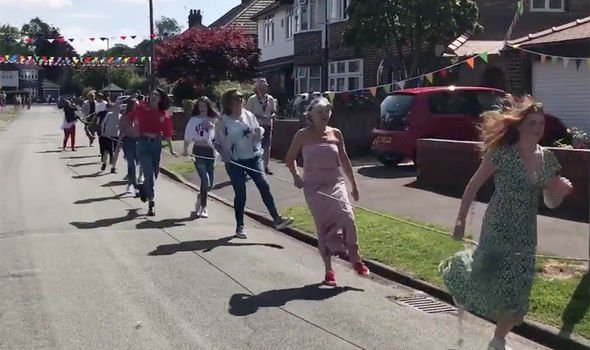 I actually feel a wee bit sorry for the poor soul who organised the now-infamous VE Day conga (above). Yes, they broke the rules and shouldn’t have done it, but lots of people have misinterpreted the ‘2 metre rule’ and the organiser clearly, but mistakenly, thought they were bringing a bit of much needed cheer to their community in a reasonably safe way. But the story of their moment of illicit fun has spread faster than the virus itself, hyperinflated in significance to become shorthand for the epitome of recklessness and stupidity at a time of crisis.

So why has the conga resonated, and not, say, the people congregating on Westminster Bridge a few weeks ago, under the noses of the police, to ‘clap for carers’, with joggers squeezing between them? Why not the holding of the Cheltenham festival at the start of the UK virus outbreak? Why not the terrible spread of the virus through our care homes? All of these examples are much more dangerous in terms of spreading disease, but a forbidden conga makes a great story.

Before we humans started writing stuff down, we told stories around the campfire. Stories are the natural way we communicate, whether reading the paper or gossiping over the fence. The things you remember from your school history lessons don’t tend to be dry facts and figures, but great stories. Nobody can remember what the population of the UK was, or its GDP, or what shoes people wore during Henry VIII’s reign, but everybody remembers what happened to his wives. We lap up centuries-old but highly dubious gossip about the number of Anne Boleyn’s digits or Catherine the Great’s, er, equestrian pursuits, because they are tabloid-friendly stories to this day.

As Sustainability change managers we need to both embrace and fear the power of the anecdote. Some of the best Sustainability messaging I have seen in organisations tells the story of how an individual has risen to the challenge of making their department more sustainable. In one large manufacturer, an engineer was inspired by the instant start/stop feature of his son’s car to design a similar system for the production line allowing any part of the process to switch off when not needed, saving loads of energy. Everybody I met in that business knew this story, to the slight embarrassment of the guy in question, but nobody could quote me the company’s Sustainability policy.

On the flipside, anecdotes can be dangerous. The tiny number of pedestrians killed in collisions with cyclists every year means that each death is newsworthy, while the steady daily toll of pedestrians killed by cars continues unreported, feeding the myth that cyclists are a menace (and holding back one of the fastest ways to cut carbon emissions and improve air quality). The conga story creates a feeling that the lockdown is being widely flouted when analysis shows it is being broadly respected. Who wants to listen to statistics when there is a story to tell?

When politicians talk about ‘controlling the narrative’, this is what they mean. You need to make sure your stories are more resonant than those of the naysayers, and keep repeating them so they drown out all the “yes, but, my Auntie’s hairdresser knows someone who says…” gossip. Yes, you must always back up your stories with facts, but keep some great, inspiring tales front and centre of your communications.

[* the biggest risk from the conga was almost certainly other people emulating the idea and the lockdown starting to erode fast, so from that sense it was unwise. The upside of the scorn heaped on the participants is that it will make people think twice about similar activities.]
No Comments
2
Share