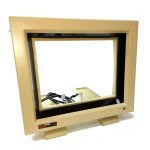 When I was a geeky teen in the early-mid 1980s, the arrival of a BBC Micro Model B into our house was a huge life event. A computer. In our house.

It really did resonate to the level that the ‘burble burble bing bong burble’ sound of a game loading off an audio cassette still sends a shiver down my spine. I used to buy computer magazines every month just to lust over the peripherals available, but in reality a floppy disk drive and a joystick were as far as we went. But one piece of kit I never saw the point of was the touchscreen – a big ugly beige square (right) which you could fit to the front of your monitor and point at stuff. But why?

At roughly the same time, Apple launched the revolutionary Macintosh with its point and click graphical user interface (GUI) system, but it was 2007 before the iPhone combined the GUI and touchscreen to such world-changing effect – 20+ years to bring two existing technologies together into an extraordinary package.

I like to remember this when we are trying to plot a way to a Sustainable future. Technological/societal advancements do not happen in smooth linear progressions, but fits and starts, small wins and big failures, until suddenly the moons of technology, intuition, society and economics align and an apparently overnight breakthrough happens.

In the same way, we have a massive cloud of jigsaw pieces of Sustainability swirling around and slowly but surely they are starting to form into patterns and subsections of the overall picture. Some of these clumps might be in the wrong place for now, but eventually those bigger sections will join up and the picture emerges. Synergies will start to kick in, eg every time your organisation makes a step towards a circular economy supply chain, it strengthens such supply chains for other companies too, and vice versa. Likewise, the substantial fall in the carbon intensity of the electricity grid is cutting everybody’s carbon footprint while they sleep, and now people are looking at the gas grid.

What is most important is to keep going, even if the end results seems very far away and progress seems slow – I strongly believe we’ll see a massive acceleration to success as the green economy becomes ‘the new normal’.