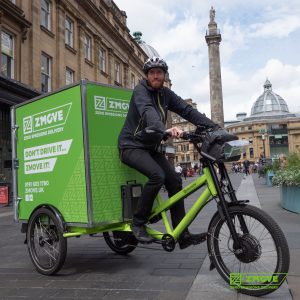 A few days ago, I had a meeting with Robert Campbell, one of the founders of ZMove, a green delivery company, ZMove uses e-cargo bikes for what is commonly known as ‘last mile’ deliveries, but this sells them short – the bikes have plenty of range to cover the whole city, carrying a whopping 200kg.

For those who don’t know, ebikes use an electric motor to assist the rider, kicking in when the going gets tough (usually uphill). They are revolutionising cycling, opening it up as a form of transport and/or leisure to those who don’t feel able to pound the pedals like Tadej Pocagar up Mont Ventoux. But the technology has also increased the scope for carrying cargo by bike, whether commercial deliveries, doing the weekly shop or taking the kids to school.

ZMove has seen a gap in the market that ebike technology has opened up and moved quickly to exploit it. You can see what they offer their clients – a quiet, quick, low carbon solution which has great visual appeal for those glossy CSR reports. So, what is holding them (and similar services) back? 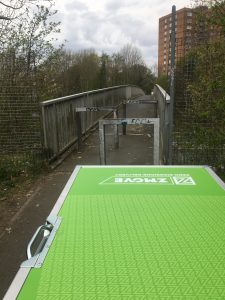 Well, the usual big one. We are trying to change rapidly to a Low Carbon Economy when all our infrastructure has evolved over decades to support the high carbon system we want to disrupt. For example, the A1 dual carriageway slices through the West of Newcastle. If you want to cross the A1, you are faced with huge roundabouts with three lanes of fast moving traffic, or cycle/footbridges with barriers which are impassible by cargo bikes (see pic lower right). [It is a matter of pride that on ‘my’ side of the City, I got a new barrier-free foot/cycle bridge installed across the concrete collar of the Central Motorway East, so all users have at least one decent access point in this area.]

Green Entrepreneurs not only have to provide a competitive product/service, they have to change/smash/dodge the barriers presented by the wider environment, whether those barriers are financial, social or physical. Obviously there is often a cost to change, but the biggest barrier is, as usual, six inches wide, the space between peoples’ ears. Getting relevant decision makers to understand and face up to barriers to Sustainability is never easy – it’s too easy to shrug and think ‘that’s the way it is’. But to quote Mike Monteiro “The world is not broken, it is working exactly how we designed it to.” And to quote that other modern great thinker, Bob the Builder “Can we fix it? Yes we can!”

Full disclosure: Robert and I met because he wanted to raise some of these issues with me as a Newcastle Councillor and I will be taking these up with the Council. I am using ZMove as a case study here (with permission) as it is a brilliant illustration of the challenges facing green entrepreneurs, but I do not have any business relationship with ZMove or Robert. Photos © ZMove.