The Climate Crisis: Focus on Change, not Blame

The Climate Crisis: Focus on Change, not Blame 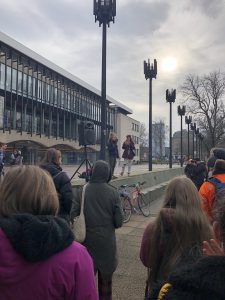 Last Friday saw an event which filled me with pride, but with a tinge of shame. My 10 year old middle son, Jimmy, stood up in front of a couple of hundred people at the Newcastle Climate Strike and, with no preparation or notes, told the crowd exactly what he thought (right). And he told them to stop pointing the finger at other people and instead think about what they could do themselves to fix the climate crisis. So proud of my boy!

The tinge of shame comes because I wasn’t there to see him. I didn’t go because Friday morning was the one weather window between Storm Ciara and Storm Dennis where I could get out on my bike and, in any case, I don’t like marching behind a banner saying “Kill Capitalism” because I don’t believe in that. If I’d known Jimmy was going to speak, I’d have forgone the bike ride, swallowed my misgivings about the slogans, and made the effort.

The socialist slogans and the “eat the rich” chants are a moot point because we need the climate movement to be inclusive in the broadest sense of the word (not just in the social justice warrior sense.) Given the working classes of the UK had just rejected a dyed-in-the-wool socialist, Jeremy Corbyn, as Prime Minister, the Corbynista tone of such events seems out of step with ordinary people (I went to the last one, before anyone complains). What’s the point of a protest if it tells people they’re not welcome?

Speaking of Mr Corbyn, during the General Election campaign he claimed that his plan for tackling the emergency wouldn’t impact on ordinary people as he was going after the big polluters. That may sound great, but it doesn’t stand up to the minutest of scrutiny. If you look at the Guardian’s list of the 20 most polluting companies (12 of which were state-owned which undermines the ‘capitalism is killing the planet’ argument), it is their product – oil and gas – that is polluting. Ordinary people currently rely on those products – they put petrol in the their car, burn gas in their combi boiler, eat food trucked to the supermarket and fly to their summer holidays in planes burning kerosene. There is no way you can address all that without individuals changing the way they live their lives – which takes us back to Jimmy’s point.

I like to think Jimmy is a chip off the old block. I’ve never been comfortable pointing the finger on environmental issues – we are all complicit in the society and economy as we are all part of it. The climate crisis was not caused by the rich, or a shady cabal of capitalists, or Boris Johnson, but by people burning fossil fuels (plus agricultural practice etc). The atmosphere does not care whether a tonne of carbon is released by the product of a humungous private company like Shell or by the (spluttering) engine room of socialism like Petróleos de Venezuela. It’s a tonne of carbon full stop.

This is why I’ve always concentrated on making change happen – either my own efforts like planting 400 trees, implementing policy in the local authority to help local citizens cut their carbon footprint, or helping clients develop sustainability strategies so their decision-makers own the solutions, not me. We need change, not blame.