Ukraine and why we need to end the age of oil

Ukraine and why we need to end the age of oil 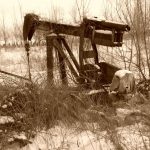 About 18 years ago, Mrs K and I took the Trans-Siberian railway across Russia (technically, it was the Trans-Mongolian we rode). We had a wonderfully chilled trip – reading, eating chocolate and sipping Soviet Champagne ($2 a bottle, if I recall correctly), stopping off at various cities along the way and meeting lovely Russian people. One of the books I read on the trip was Globalisation and its Discontents by Joseph Stiglitz which argued that Russia opened its economy too quickly after the fall of Communism leading to a kleptocracy where favoured oligarchs got their hands on state industries and made their vast fortunes – as long as they kept in favour with the Kremlin (it could get very messy if they didn’t). As I read, we trundled past seemingly endless trains of oil tankers emblazoned with Yukos, the name of the main Russian oil company at the time.

Fast forward to today and Putin’s horrific and seemingly pointless invasion of Ukraine and we can see the vein of petrodollars running through the crisis. In response to the invasion, Germany has  put its Nord Stream 2 gas pipeline from Russian on hold. It was said this wouldn’t be a problem for Putin as long as he had China to sell fossil fuels to. But then China started distancing themselves from Mad Vlad and things don’t look quite so rosy for the Russian war. No point in having lots of resources if no-one wants to buy them.

Since the rise of the post-war economy, fossil fuels have underpinned many such crises and scandals. Terrible regimes in Saudi, Iran and Venezuela are propped up by geological good fortune. Progress on tackling the climate crisis has long been stymied by vested interests around the world not wanting to abandon those lucky breaks.

The obvious political upside to renewable energy is that its distributed nature is by its very nature egalitarian and almost impossible to control and/or monopolise. That would be great for the many, but not so good for the vested interests who will want to cling to their sources of power, both physical and political. But sticking with the oil economy locks us into more scandal, more suffering, more tragedy. The sooner we get to the end of the age of oil, the better – not just to stop climate change, but to save us from power-hungry nutters too.