Whose carbon is it anyway?

Whose carbon is it anyway? 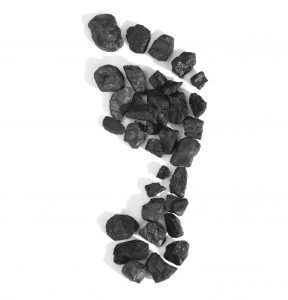 I’ve mentioned before that over the summer I got into a Twitter row over how much the individual should take responsibility for their carbon footprint. It has become a recent meme that the whole concept of a personal carbon footprint was created by the fossil fuel industry to shift the ‘blame’ for climate change from them to the public (an argument that doesn’t stand up to much scrutiny*).

As I responded at the time, no fossil fuel industry executive has ever forced me to eat steak or board a long haul flight. I love both eating steak and travelling to far-flung places, so I can’t really point the finger at anyone else – those activities are intrinsically high-carbon and I made my choice (I’ve now cut back radically on both).

On the other hand, when I had a hernia a couple of years ago, I had little say over the huge global warming potential of the anaesthetic gas I was given. Likewise I don’t really have a viable source of zero carbon food – even staples come with a footprint. So what part of my footprint is truly my responsibility and what should be the responsibility of the NHS or the food industry respectively?

You could argue that my responsibility/blame covers decisions over which I have full control (eg steak or veggie curry for dinner) and not the areas where decisions are out of my control (eg healthcare). But there are a whole raft of in-between-y areas where I could do something greener, but external factors make me baulk. I’m writing this just before I drive my youngest to football practice as the route isn’t safe enough (in my opinion) for me to cycle with him in the dark. Some would say that’s fair enough, others would make the effort (don’t worry, I have a solution on order!).

This blurred boundary on responsibility extends to offsetting. Setting aside the debate over the effectiveness of offsetting, if I decide to offset my whole footprint and, say, the NHS offsets their’s, then that would be double counting. The NHS has a net zero target so at some point they will offset any residual emissions, but so does the UK Government – how will the latter decide which emissions still need offsetting by their 2050 deadline?

During yesterday’s Corporate Sustainability Mastermind Group (CoSM) meeting on Net Zero, we debated this at length. One member mused that, if every organisation in the world decarbonised their direct (ie Scope 1) emissions, then the whole value chain would achieve zero emissions as all suppliers, including electricity generators (ie Scope 2 for everybody else), would have a footprint of zero, so we wouldn’t have to worry about them.

But. This assumes the current economy and value chains have the opportunity to go zero carbon and that is very unlikely (eg the airline industry or the beef industry) and that every organisation is equally willing to strive for zero emissions. For a truly sustainable economy, many organisations will have to change their business models and that requires new supply chains which will only evolve when a critical mass of demand arises. So to what degree does each organisation’s supply chain emissions form part of their responsibility and what should be delivered by each supplier?

Of course the best in Sustainability take full responsibility for all their emissions related to their whole value chain and are more than willing to tear up their whole business model and start again. They would argue that the blame game is a distraction from the moral imperative to do everything we can to avert the looming crisis. And that, in my book, is the right answer for individuals, companies and Governments alike.