You can’t always get what you want, but if you try, sometimes…

You can’t always get what you want, but if you try, sometimes… 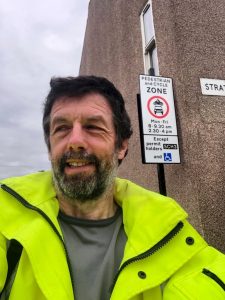 At the weekend, I met up with a group of school friends to go and watch the Rolling Stones at Hyde Park (they were brilliant). As we ambled towards the gig, one of those friends asked me “I know you’ll have to be optimistic as a professional, but do you think we will sort climate change?” My slightly glib response was “We can, but whether we will is a different matter.”

I was thinking about this again as I blearily took the youngest to school this morning. Two weeks ago, we started a ‘School Street’ scheme, effectively banning most traffic in the streets immediately around the school at drop off and pick up times. This took a humungous amount of engagement with kids and parents by Sustrans, the sustainable transport charity. As a local Councillor I helped out on the morning shift of the first week, donning hi-vis and having a word with drivers who were trying to turn into the forbidden zone.

Since the hi-vis presence has gone, a small number of parents, commuters and taxi-drivers have taken to ignoring the new rules – unfortunately we don’t have camera enforcement (yet). However the highly congested nightmare we used to see outside the school gates has gone – not only within the zone, but in the roads just outside that. This suggests the scheme isn’t displacing traffic but reducing it, encouraging the Holy Grail of a modal shift towards walking and cycling. What’s more, the people who we stopped and told about the scheme were relatively OK with it – I didn’t get any flashes of anger, just a couple of exasperated tuts.

It’s been understood for a long time that while most people want decisive action on climate change, they don’t always associate carbon emissions with their own behaviour. In fact there’s a big chunk of the anti-capitalist wing of the green movement who actively preach that climate change is the fault of the evil demon called ‘neoliberalism’ and nothing to do with the poor oppressed individual. However I see no path to Sustainability which doesn’t involve the general public changing their lifestyle and that is always going to be the tricky bit, as I told my friend. My experience on the School Street shows that, if you try, sometimes you get what you need.