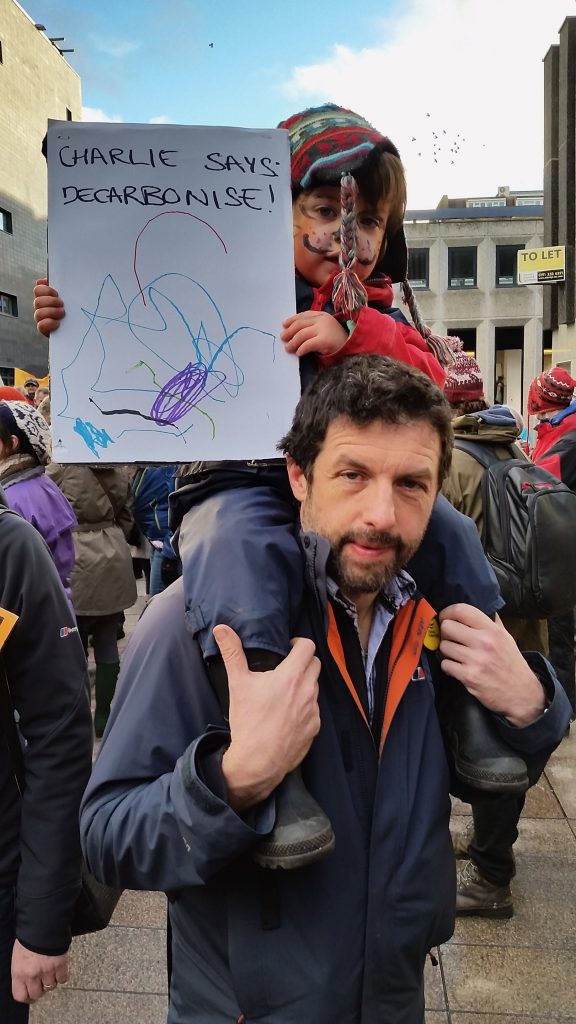 Me and youngest son, Charlie, on a rare climate march.

We asked our kids whether they were interested in last week’s children’s climate strike and got a series of noncommittal grunts in reply. While we were supportive of their right to take part, we weren’t going to chivvy them into skiving off school if their heart wasn’t in it just to make us feel good as liberal parents. And while I admired all the kids that did go and protest, my inner Dad voice was saying “Well I hope you’re going to start switching off a few lights from now on.”

I don’t mean to be cynical, but lots of people and organisations claim to be very ‘aware’ of climate change and other Sustainability issues, but there is a definite disconnect from good intentions and actions. Walking down a street with a banner chanting slogans feels like action, but it won’t save a single kilogram of CO2 being emitted. I have known several people over the years who were very vocal over green issues, sometimes aggressively so, but who drove an SUV. And, hands up, I have a car and take 1 or 2 flights a year, but I make a point of not pointing the finger at other people.

The big challenge for those of use facilitating the move to sustainability is to translate awareness into action. Change only happens when people make different decisions to their default. In fact, a decision maker who hasn’t even heard of climate change can do the right thing if they are properly incentivised to make low carbon decisions. I don’t care what motivates people as long as change happens.

This view tends to upset the purists who want everybody to go through weird initiation rites into the high priesthood of Sustainability. But, frankly, I’ve never met a purist who changed anything.