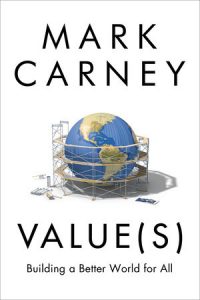 When appointed Governor of the Bank of England in 2013, Mark Carney was described as the Rock Star of Bankers. Well, in Value(s), Carney has released a solo triple concept album where the central theme is integrating those eponymous values into the economic system to address three big issues: the weaknesses that lead to the 2008 credit crunch, the Covid pandemic and the climate crisis.

Obviously I was most interested in the last of these. Of all people, Carney, with his lengthy experience at the apex of global finance and his new role as UN Envoy for Climate Action, is in a superb position to see what needs doing. But to get there, he starts with a potted history of economic philosophy – what is value? What is money? How do the two overlap etc?

Unfortunately, like many concept albums, between that starting point and the conclusion there is a lot of self-indulgent noodling. Some passages (particularly on the economic crisis) were clearly cut and pasted in from a different source as the language switches suddenly from moderately readable to pages of indigestible academic stodge and back again. The tone varies as well, with snippets of personal reflection scattered slightly randomly through the theory. I liked these anecdotes as they illustrated his points more clearly than the theory sections and reminded us he’s been there, done that.

Carney brings all his thinking together in the final chapter, “How Countries Can Build Value for All”, where he finally sets out his main proposals. As with much of the rest of the book, I struggled to keep abreast of where I was in all the lists nested within lists within lists, but then I realised that this was maybe kind of the point. For all our eulogising of the simple cut-through message of, say, Greta Thunberg (who gets name-checked appreciatively), the solution to the climate crisis probably lies in dozens and dozens of rather dull technocratic changes to a raft of different aspects of our socioeconomic system. Writing this two hours after finishing that chapter, I have to say I can’t actually recall many of those proposals, apart from the idea of Governments appointing Climate Councils to set climate policy – a kind of expert Citizen’s Assembly. But I was left with the impression of a thorough and practical manifesto for change.

Going back to the concept album analogy – imagine how good Pink Floyd’s The Wall would be if they had judiciously pruned it down to a single album, jettisoning all the self-indulgent tuneless crud and letting stand-out tracks like Comfortably Numb truly shine? That’s how I feel about this book – while its ambition, scope and motivation are impressive, halving the word count (and often sentence length), imposing a more intuitive hierarchy of headings and adding more anecdotes would have made Carney’s message at least twice as clear. But then again, just as many prog-rock fans love impenetrable triple concept albums, maybe Carney’s target audience likes sifting through lengthy technocratic screeds for the nuggets within. Personally, I’d’ve preferred a few more 3 minute pop classics!