My Life in Sustainability (so far)

My Life in Sustainability (so far) 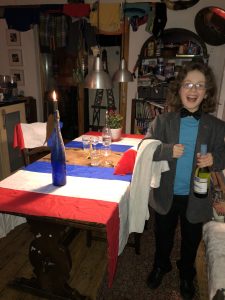 Mrs K had planned to whisk me away to Paris by Eurostar for the weekend, kids staying with a friend, enjoying some rare time alone together in a city with many romantic memories for us. Obviously the pandemic put paid to that, but magically a Parisian bistro came to us on Saturday, with its very own little maitre d’, a stunning view of the Eiffel Tower and some great food.

Yesterday with the kids in school, Mrs K and I took advantage of the easing of lockdown rules to cycle out to the coast at Tynemouth (“the sea, the sea!”) and then took the ferry across the Tyne and rode to the Tyne pedestrian/cycle tunnel which is always a treat. Once back home, we had a few socially distanced beers in the garden with a small number of people we hadn’t had a chance to talk to properly for a long time. The novelty of all of this was remarkable and I don’t think it’s any surprise that last night I slept for 8 hours straight – the first time for as long as I can remember.

Reflecting back, I’ve been striving for Sustainability for pretty much all my adult life, starting when I became SU Green Officer at college, introducing a recycling system and arranging an energy audit before either were standard practice. After a couple of years in the Civil Service, I took a career break to travel the world and had my Road to Damascus moment in the far north of Russia seeing the devastation wrought on the taiga by a nickel smelter. That trip was cut short by an illness in the family, but I came back with my environmental fervour at a boil.

I remember going to a meeting of the local Friends of the Earth chapter, but finding their approach not to my liking – they wanted to go and hand out sweets to people arriving by train to thank them for not driving which I found bizarre. Instead I found a much more comfortable home at the British Trust for Conservation Volunteers where tree-planting, pond digging and habitat creation gave me a feeling of actually doing something useful. I also made many lifelong friends.

My biggest stroke of luck was when a Design for a Clean Environment research job at Newcastle University’s Engineering Design Centre appeared, hitting the nexus between my engineering mind and environmental principles perfectly. Two years at the EDC gave me the CV to land the Centre Manager job at Teesside University’s Clean Environment Management Centre (CLEMANCE), and after six years there, I decided to throw myself into my long term plan of running my own business – and here I am almost 15 years later! The freedom I now enjoy is something I will never give up willingly – I’d never have written any of my five books on Business and Sustainability if I was still doing a 9-5 in an open plan office somewhere.

A parallel thread on my career was getting elected to Newcastle City Council in 2004. I was Deputy Executive Member for Environment and Sustainability for seven years and then, following a change in political power, became Shadow Cabinet member for the same role (apart from one year off at the behest of the electorate). The highlight of this effort was Newcastle getting designated UK’s Most Sustainable City two years running in the ‘in power’ phase, and I’ve tried to hold the current administration’s feet to that particular fire ever since. But the biggest learning from my 16/17 years’ experience is making Sustainability work for real people living real lives – for example the simple recycling system we introduced, to howls of protest from local green activists, which boosted recycling rates by 50% overnight.

The thread through all of these years of experience is that pragmatism rules. Virtue signalling and green exclusivity are just as much dangers to the future of our planet as greed and ignorance. I have always striven to take Sustainability to people rather than expecting people to come to Sustainability. That is the only way Sustainability will happen.